The Ties that Bind

I needed forty feet of cloth-covered cord for the Prairie Skin in order for each side to have two ten-foot cords. I suppose I thought that if one took the trouble to make a wrapping cloth for a human body, it ought not to come unwrapped. So, I needed 40 feet of bias strips of cloth to make the cords.

All I had to do was sew the bias strips together into ten foot lengths . I knew I didn’t want to be paralyzed by indecision so I used the John Cage method: I took advantage of chance by throwing all the strips into a box, mixing them up and drawing them out one by one.

I chose the cording method where you sew the fabric (inside out) around a cord that’s twice as long as what you need and then turn the fabric right side out upon itself along the empty cord.

Here are my completed cords:

“Blessed be the tie that binds” goes the hymn we sang at one of those Wellesley College chapel events we had to go to.

These ties may not be blessed but they were hard won.

*I found the sculptor Jackie Winsor when I first started studying sculpture in the ’80s and that may have been unfortunate because she said that she could spend six months worrying about a quarter of an inch and so her work gave me permission to be obsessive. This is of course not her fault. And, if we wished to re-frame “obsessive” more positively, we could call it “painstaking.”

I have all the tools. “Cheater” needles (self-threading) and Thread Heaven thread lubricant and “finger cots” and a thimble and locking-pliers for when the fabric is painted or heavily stitched and it’s nearly impossible to pull the needle through. I sew five times through the holes, then make a knot, then wrap the thread five times, then make another knot, then knot again.

Between heaven and earth I write one line.
Sometimes another line follows:
ambitious legions singing their way nowhere,
or ordinary messengers carried deeper into human life
by the music and its woman stepping out of her clothes,
to the heartbeat of what comes next, what goes on for its own sake.
The page after the last page, on which we do not appear.

And that is part of the solace of repetitive labor—I sit still but my memory ranges.

Between panic and peace, I sew one button . . . . Sometimes another button follows.

Silence has a presence

“Silence can be a plan
rigorously executed

the blueprint to a life

It is a presence
it has a history a form

Do not confuse it
with any kind of absence”
—Adrienne Rich

Orfield Lab’s anechoic chamber, a three-dimensional sound “sponge,” is the quietest place on Earth. It is designed to keep out all external sound and extinguish all reverberation.

When immersed in such silence, we hear our heart, breath and blood and conjure up music and voices that sound real. It seems we can replace the echo chamber with the anechoic chamber but we can’t get rid of the reverberations of our own memories.

END_OF_DOCUMENT_TOKEN_TO_BE_REPLACED

The irony doesn’t escape me. Our capacities for remote sensing increase daily. Nothing is beyond our digital and disembodied grasp: the floor of the ocean, the depths of Antarctica, the surfaces of Mars, even our own lives, as bots scour the web for information for (and about) us.

We are captivated by what we see on the screen. And also, held captive by it—bound and contained in spite of our limitless reach. Forgetting to look at—much less hear, or smell, or touch—what’s around us.

More sensitive tools make our maps more accurate. But just as history is more than chronology, mapping is more than data. At the least, when we ourselves map, we represent where we are relative to somewhere else. We specify that we are “here” so we’ve attended, in some way at least, to what else is “here” and established a relationship with what is “there.”

I want to use touch to communicate, use sound to orient and navigate, use sight to document and investigate.

So I’m doing a kind of sensing. But it’s local, not remote. Visceral, not mechanical.

draw: trace or produce a line or mark; pull or guide; extract
draw: a natural ditch or drain; a shallow valley

Last year I drove from Lincoln (Section 52 in my grid) to Scottsbluff (Section 37) to give a workshop as part of Picturing Nebraska.

Leaving Sidney (Section 62) for Kimball and going west on Hwy 30, I saw Sidney Draw on the map.  Having drawn Sidney Draw I decided to explore it.

END_OF_DOCUMENT_TOKEN_TO_BE_REPLACED

We must use what we have to invent what we desire. —Adrienne Rich

alchemy: a seemingly magical process of transformation, creation or combination

Prairie Skin, a work in progress, is a life-size, reversible, pieced and quilted construction which is large enough to wrap a body.

Part of my Mapping Nebraska project, this piece is informed by my travels across the state and my memory of its prairies and grasslands.

I remember my first art teacher’s teacher telling me about a nomadic tribe whose cradles (carried on their backs) functioned also as “portable shrouds” because so many infants died. I want this Prairie Skin to also be portable and to have multiple functions: shelter and shroud, commentary and covering, record and map.

END_OF_DOCUMENT_TOKEN_TO_BE_REPLACED

In the British Museum in the 80’s, the Rosetta Stone was not (at least in my memory) encased in glass but sat open to the air. As I stood beside it and imagined touching its incisions, another tourist, part of a small group identified by matching bags, began filming the stone with a video camera. At this time, before smart phones and digital cameras, I rarely saw anyone using a video camera in public.

The rest of the group was talking quietly, their comments echoing what I was thinking but not saying aloud (“Look, it’s the Rosetta Stone! It’s old! It’s the key! It’s It’s smaller—larger—different—just as I imagined.”)

END_OF_DOCUMENT_TOKEN_TO_BE_REPLACED

What the water knows – Part 2

My fabric terrain is neutral
Colorless and abstracted, like the map,
except for the water
which is stitched in blue

Listen to more at http://chirb.it/rkJ8s6

What the water knows – Part 1

How many creeks have I drawn on my Locator Map? Every one that I could see. I’d look at a topographic map and draw with pencil on 12 inch squares of Tyvek. I would branch off from a river and continue, my line growing finer and fainter, until the creek, and my line, disappeared. 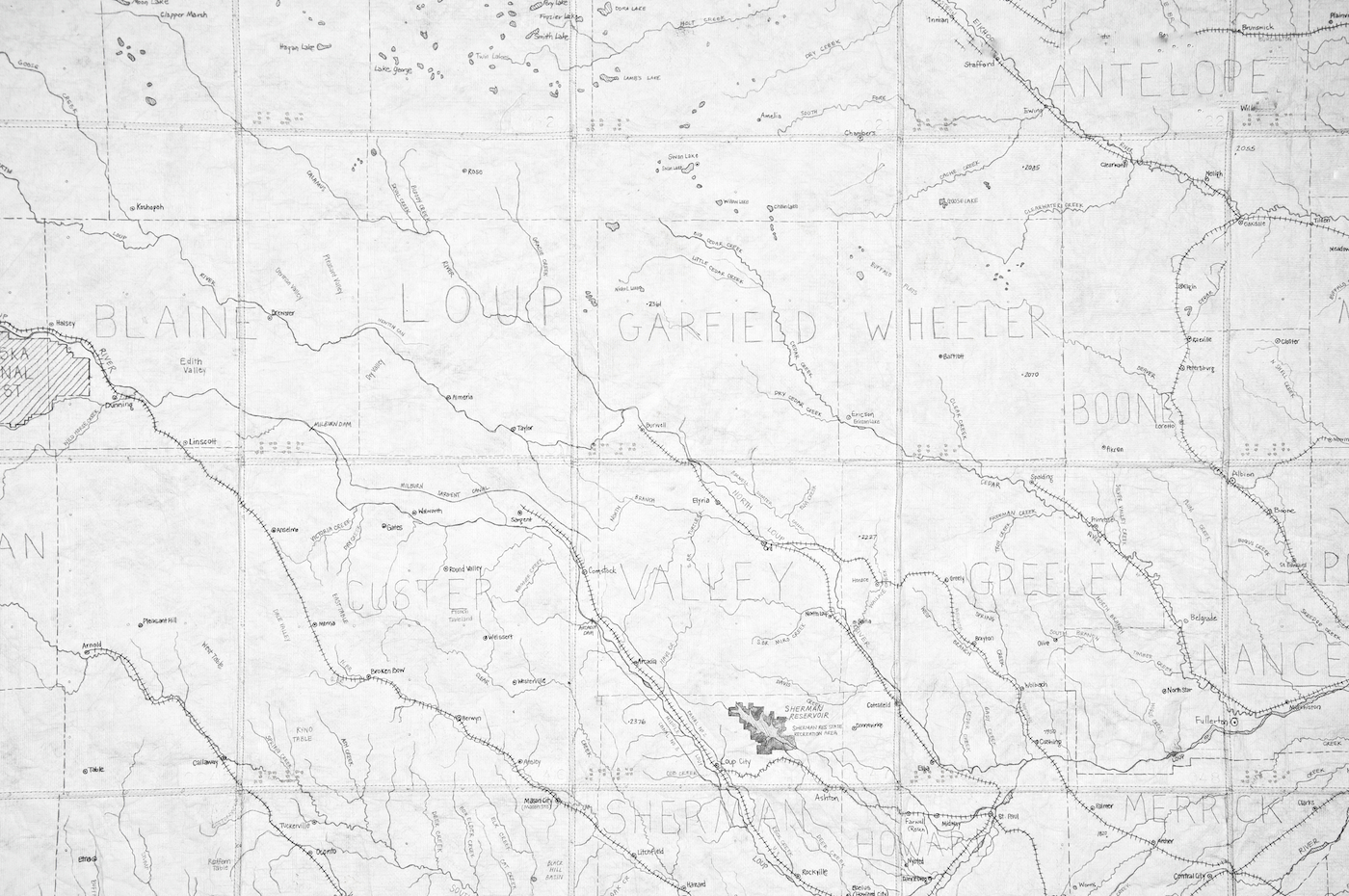 I began to love those meandering lines, that tracery that became denser and then more spare, that branched past the towns and railroads, that stretched, yearning, into open ground.

END_OF_DOCUMENT_TOKEN_TO_BE_REPLACED

The traveler who has lost his way doesn’t want to know where he is. What he wants to know is “where are the others?” — Alfred North Whitehead

I’m mapping Nebraska: making a stitched, drawn and digitally imaged cartography of the state where I live. Locating myself. And the viewer. Trying to understand the place where I am.

I began by drawing all of Nebraska—95 squares stitched together to form a 15-foot Locator Map. My map records physical features—lakes and rivers creeks—and geographical features —railroads, parks and towns—and all are to scale (1″ = 2.75 miles) and in their correct relative position. It’s as accurate as I can make it.

I created this map of Nebraska for some of the same reasons we’ve long used maps—to see where I am relative to the other places, to get a sense of my surroundings and to try to comprehend a whole I can not see. The Locator Map tells me about borders and boundaries—county lines and standard parallels and the extent of the Nebraska National Forest and how far, in relative terms, Antioch is from Ellsworth. It gives me a geographical overview. It lets me know, if I’m drawing the area around Gaunt Lake, that I’m north of Oskosh and East of Alliance, in Sheridan county.